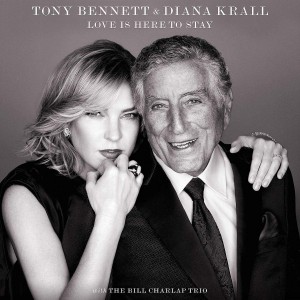 Part of the reason that Tony Bennett, 92, has remained artistically vital over the decades is his willingness to work with unexpected vocal partners, as evidenced by A Wonderful World (his 2002 collaboration with K.D. Lang), Cheek To Cheek (his 2014 release with Lady Gaga) and his series of Duets albums (which included contributions from Paul McCartney, Aretha Franklin, Amy Winehouse and Marc Anthony). On Bennett’s new album—devoted to the compositions of George and Ira Gershwin—his vocal partner is of the more expected variety, given her long history of interpreting the Great American Songbook: Diana Krall. Bennett and Krall have, in fact, recorded duets before, on his albums Playin’ With My Friends: Bennett Sings The Blues (2001) and Duets: An American Classic (2006). But Love Is Here To Stay marks their first album-length collaboration. One unusual twist here is that Krall doesn’t play piano on the session, instead focusing on vocal duets with the master, while the instrumentation is provided by pianist Bill Charlap’s impeccable trio. The result is a gem that showcases not only the longevity of the material, but of Bennett himself, who found fame after serving in the Army during World War II.

Bennett and Krall offer 10 delightful duets—including “I Got Rhythm,” “Do It Again” and “Nice Work If You Can Get It”—and each vocalist delivers one solo rendition; his is “Who Cares?” and hers is “But Not For Me.” Just as salt and pepper can work together in a recipe, Bennett’s authoritative vocals and Krall’s more delicate delivery complement each other, and several tunes conclude with a delicious bit of unison singing. On the album opener, “’S Wonderful,” there’s a brief segment in which Krall very quietly scats beneath Bennett’s lead vocal. That moment, along with Bennett’s chuckle at the end of “I’ve Got A Crush On You,” illustrates the singers’ chemistry and camaraderie. On “Somebody Loves Me,” there’s a slight reversal of typical roles, as Krall is more exuberant and Bennett is more subdued. These vocalists’ performances are a master class in the art of listening, reacting and then listening even more closely before responding. A swinging version of “My One And Only” features Charlap’s fluid pianism, drummer Kenny Washington’s compelling brushwork and a sturdy bass line from Peter Washington. It also features the type of clever lyrics that made Ira Gershwin such an important partner to George: “I tell you, I’m not asking any miracle/ It can be done, it can be done/ I know a clergyman who will grow lyrical/ And make us one, and make us one.”

Hardcore Gershwin fans might want to seek out the Target Exclusive version of this album, which contains two additional solo tracks: Bennett’s reading of “Oh, Lady Be Good!” and Krall’s rendition of “How Long Has This Been Going On?”