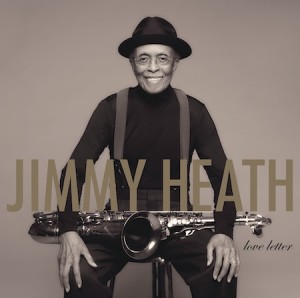 Love Letter, completed just weeks before Jimmy Heath’s death in January, represents a significant first: Of the saxophonist’s more than 20 albums as a leader, this poignant farewell is his only recording solely consisting of ballads.

Throughout the album’s eight down-tempos—a selective complement of lesser-known pieces and time-honored standards—Heath reveals a refined emotionality that bebop hubbub seldom allows. Take his long, mournful tenor solo on “Don’t Explain,” one of the album’s two nods to Billie Holiday, or the disarming lilt of his soprano on “Inside Your Heart.” Reflective moments like these define the album, but the recording’s success rests in no small measure on the subtle responsiveness of Heath’s rhythm section. His generous arrangements underscore the value he accorded these players, as on “Con Alma,” where a twisting melody finds its rhythmic center in drummer Lewis Nash and bassist David Wong’s decisive groove. The same goes for pianist Kenny Barron’s velvety setting on “La Mesha,” Heath’s wistful duet with trumpeter Wynton Marsalis.

Heath also pairs off with two other formidable guests: vocalist Gregory Porter, on a version of “Don’t Misunderstand” that’s so crushing future balladeers might pause before taking it on; and vocalist Cécile McLorin Salvant, on “Left Alone,” an aching melody that undergirds Holiday’s despondent lyric about isolation and loss. During the outro of that latter tune, Heath faithfully echoes Salvant’s phrases, but drops out before the final line. The unvoiced riff rings all the louder for its absence.