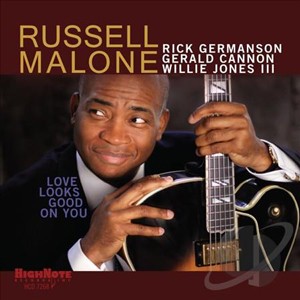 Guitarist Russell Malone has been a terrific accompanist to Harry Connick Jr. and Diana Krall, but it’s always a treat when he releases an album as a leader. On Malone’s new disc, Love Looks Good On You, he leads an outstanding quartet with pianist Rick Germanson, bassist Gerald Cannon and drummer Willie Jones III. This superb project illustrates how Malone’s style is firmly rooted in the straightahead jazz tradition while still maintaining a modern sensibility. The album opens with “Soul Leo,” which was written by one of Malone’s former collaborators, the late pianist Mulgrew Miller. Here, Malone’s fretwork combines incredible technique with an intoxicating groove. The quartet’s interpretation of Thad Jones’ “The Elder” is timeless in the best sense of the term: It’s a gem that sounds like it could have come from any number of decades. Elsewhere, the version of George Coleman’s “Amsterdam After Dark” is an example of how Malone can play hard and soft within the same tune, crafting a track that’s easily accessible but still burns. “Your Zowie Face” has a cool ’60s vibe, and “Ellie’s Love Theme” highlights the great interplay between Malone and Jones. The guitarist produced this album, and the latter track soars, thanks to a production approach that pays careful attention to space, detail and coloration. The album closes with the intricate, uptempo “Suite Sioux,” penned by Freddie Hubbard. That track, like the entire album, begs for repeated spins.