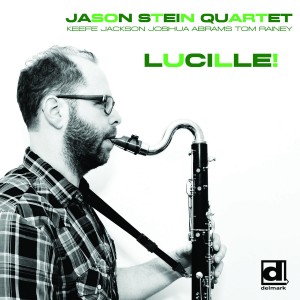 Sure, Charlie Parker’s “Dexterity” has been covered countless times. But it’s hard to believe that anybody has interpreted the bebop standard like the Chicago-based Jason Stein Quartet does on Lucille! Bass clarinetist Stein sounds like he’s having a blast bringing the piece’s upper-register flights to his low-end woodwind. When Keefe Jackson joins in on the even lower and more unwieldy contrabass clarinet, that audacity turns into a celebration.
Stein’s group navigated such paths before; its 2011 debut, The Story is Time, combined his original compositions with twists on melodies from Thelonious Monk and the Lennie Tristano school. Lucille! follows a similar blueprint, but the results sound more vigorous. That energy comes across right from the opening, a reinterpretation of Warne Marsh’s “Marshmallow” with Jackson’s pointed attacks answering Stein’s elongated lines. Drummer Tom Rainey—a relative newcomer to the band—encourages them through fleet cymbal hits.

Another part of this reinvigoration comes from Stein’s writing, as his lyrical “Ryder’s Uncle Dragon” shows that the quartet’s combinations also excel at slow tempos. Similarly, on “I Knew You Were,” bassist Joshua Abrams gradually builds tension while Rainey emphasizes open spaces. All of which serve as the ideal frame for Stein’s deliberate pacing. Abrams’ single-note lines also sound like a signal for the group to challenge each other while hitting different contours of “Halls And Rooms.”

These ominous moments don’t detract from the ebullience that runs throughout Lucille!, with the quartet’s reedists continuing to find different ways of mixing it up in their basement ranges.