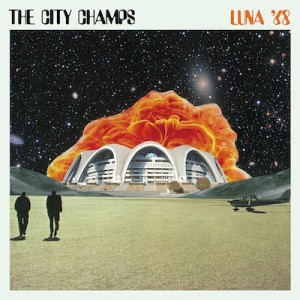 Ground control to The City Champs! The storied psychedelic soul power trio from Memphis — organist Al Gamble, drummer George Sluppick and guitarist Joe Restivo — only manifests as a unit every decade or so. On Lunar ’68, their first Champs release since The Set-Up (2010), they blast back to the future that launched them and take everyone along for the ride.

Launch yourself directly into the Champs’ topsy-turvy orbit by watching the “Lunar ’68” video. Directed by family filmmaker Andrew Fleming, the trippy mini-movie quotes everything from 2001: A Space Odyssey to Star Trek to The Man Who Fell to Earth and blazes across the cosmos, soaring above iconic hometown architecture like the Memphis Pyramid.

Perfectly situated between now and then on the space-time continuum, Luna ’68’s title track blasts off with Restivo’s reverb-vibrato homage to power-chord pioneer Link Wray. And the retro-futuristic hits just keep on coming, fueled by Restivo’s obsession with art-film composers like Piero Umilian and the one-two punch of Gamble’s Muscle Shoals-meets-Memphis organ and the Beale Street beats Sluppick mastered as a kid playing drums with his guitarist dad.

As titles like “A-Meld-A-Marcos” suggest, the Champs have their pop culture memes down. But their Deep South roots run deep and intertwine with hometown elders Booker T & the MGs on tracks like “The Lockdown,” while “Freddie King For Now” amps the propulsive drone of the octogenarian New Orleans blues great.

Lunar ’68 kicks out the jams with instruments that know how to fly, and gives us the wings we need to join them.