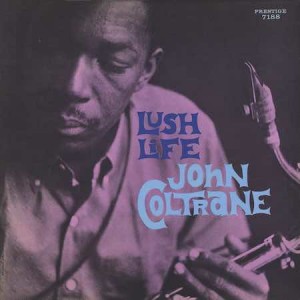 If John Coltrane can’t be all things to all people, then no musician can.

While the saxophonist always will be lauded for standing at the vanguard of change within jazz, his love of the music’s inner workings, history and the players who came before him serve as a ballast to that idea. And during the late ’50s and early ’60s, Trane vacillated between new and old ideas.

Lush Life, a five-cut album drawn from two disparate sessions in 1957 and 1958, trucks in classic songbook fare, with the original “Trane’s Slow Blues” sitting at its center. The lead-off track, Jimmy Van Heusen and Johnny Burke’s “Like Someone In Love,” arrives as sentimental as its title might indicate. And Craft’s limited-edition reissue offers it all with refined production and new liners from Ashley Kahn, housed in a sturdy, linen-swathed case.

But the title track of this 1961 album, which Trane would again record with Johnny Hartman in 1963, punctuates the bandleader’s ability to transcend time and place. It’s also a tune with a sly title that contrasts with what we might initially think it intends. By the end of this Billy Strayhorn classic, lyrically, we find out that love’s just “mush” and the song’s narrator is going to “rot” at a crummy bar somewhere, drinking to forget.

There’s not a happy take of the tune; Ella, Strayhorn and Hartman all turn in necessarily blue versions. Here, though, Coltrane—lushly assisted by a dexterous Red Garland at the keyboard—displays an ability to synthesize the tune’s lyrical content while still personalizing its message.

A 25-year-old Donald Byrd comes in a bit hot for his spotlight, but recovers quickly and helps push the tempo up a bit, granting Trane a new platform to re-enter. The pair end on a descending harmony line, giving the song its dour denouement, but one that seems significantly less dire than Strayhorn might have intended.

A more extravagant recombination of new and old came just two years later, when Trane’s My Favorite Things took a composition from a hit musical and rejiggered its purpose. On Lush Life, though, the saxophonist seems more occupied with wringing the emotional meaning from a classic, and does so gracefully and profoundly.