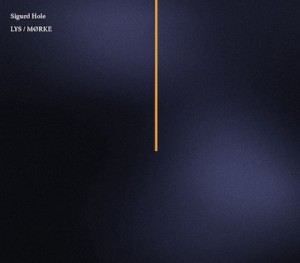 Folks writing on bassist Sigurd Hole’s latest solo dispatch, Lys/Mørke, tend to point out the connection he forged with nature while recording the two-disc set on the island of Fleinvær in the northern climes of Norway. But what gets lost in assessments like that is that Hole’s also removed himself from other people, creating a distance between his work and the culture it’s emerged from.

Still, Hole, who recently made his Carnegie Hall debut, explains his connection to nature in a press release, while noting the precarious environmental spot we’ve gotten ourselves into. While connecting humanity and nature—two things Hole actually sees as one and the same—the bassist doesn’t home in on the absence of other musicians from the recording and its process.

“The present­–day situation poses many challenges to humankind on so many levels—the climate crisis and the collapse of ecosystems worldwide being perhaps our greatest challenge ever,” the bassist exerts. “Grasping and dealing with such issues on a personal level can be very challenging. Even though I have hope we will manage to turn the tide in time, I often feel depressed and sad thinking about it all. To me, nature has always been an immense source of joy and inspiration.”

A deep, audible breath on “Speilbilde,” a track on the first disc, serves to draw listeners in closer, but also illustrates Hole’s relative seclusion. It’s a musician looking to connect with his instrument. And on the next cut, “Vaktsom,” he does, trilling bowed notes over the sound of the nearby ocean. Overtones overwhelm the sound of water as Hole seems propelled by his surroundings, reaching for some ecstatic state. That there’s about 80-minutes of the search seems to mean Hole found at least a modicum of comfort in the process. And hopefully, listeners can extract some sort of enlightenment from listening in on his investigation.