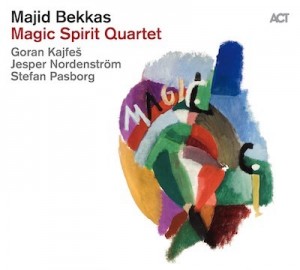 What puts the magic in multi-instrumentalist Majid Bekkas’ Magic Spirit Quartet is the trance-like power of Moroccan gnawa music. Originally developed to accompany night-long ecstatic ceremonies to call down spirits, the music possesses a rhythmic depth and emotional resonance analogous to Santería music in Cuba. But where the Cuban tradition is built on the power of drums, gnawa centers on the droning drive of stringed instruments, particularly the oud and the bass-like guembri.

Bekkas, who was born and raised in Salé, Morocco, plays both, but it’s the guembri that matters most here. It’s the guembri’s twangy, restlessly propulsive bass line that dominates “Bania,” not only working in counterpoint against Bekkas’ vocal and Goran Kajfeš’ electric trumpet, but setting up an interesting friction with trap drummer Stefan Pasborg, whose playing keeps the stress on “one,” while Bekkas’ line emphasizes “two.”

Of course, traditional Moroccan music doesn’t use drum kits, much less electric trumpet, but that’s where a different sort of magic comes into play. Although Bekkas still lives in Salé, his Magic Spirit Quartet is based in Scandinavia, where Kajfeš, Pasborg, and keyboardist Jesper Nordenström live. Likewise, although the songs stick fairly close to traditional structures, with Bekkas’ guembri defining the pulse, while his vocals work a call-and-response dynamic with Kajfeš’ horn, the tracks themselves tend to expand along fusion lines, with lengthy, over-dub friendly groove sections affording the chance to stretch out and dive deeper into the music’s rhythmic core.

That said, there’s surprisingly little dilution of the music’s essential flavor. Obviously, Bekkas’ strength as a leader accounts for some of that, as his is the sort of voice—both vocally and instrumentally—that isn’t easily watered down. But Kajfeš, whose family emigrated to Sweden from Bosnia, seems utterly at home with the Arabic modalities of gnawa, and more than holds his own with the bandleader, particularly on the dramatic, entrancing “Mrhaba.”