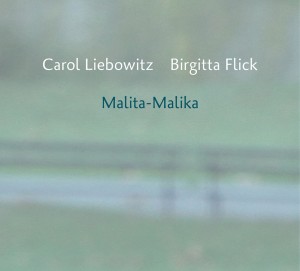 Carol Liebowitz is a specialist in one-on-one improvisation.

Of the pianist’s seven albums to date, five have been duo projects, mostly with saxophonists. And we’re not talking about quiet runs through a handful of standards; her duets tend to be collectively improvised, deeply conversational and quite fond of taking risks.

Malita-Malika, recorded with German tenor saxophonist Birgitta Flick, breaks with that model a bit. Flick—who’s probably best known through Flickstick, the quintet she co-leads with German trombonist Lisa Stick—is a strongly melodic player whose carefully shaped lines have a wistful lyricism that sometimes verges on melancholy, a sound that balances so naturally against Liebowitz’s intricately prodding piano that it would be easy to mistakenly assume that parts of improvisations like “Moon” and “Jasmine” were written out. The title track actually was (it’s one of Flick’s), yet the playing is so in character with the composition that the dividing line between reading and improvising all but disappears.

There also are some standards in the mix, two of which are sung by Liebowitz. She does a lovely job with the Harry Warren/Al Dubin chestnut “September In the Rain” (which is introduced by a playful rendition of Billy Bauer’s “Marionette”). But it’s her powerfully emotional rendering of “You Don’t Know What Love Is” that really makes the album. Where other versions tend to focus on the regret within the lyric, Liebowitz makes us also hear the anger bubbling beneath those words, not only in the edge in her voice, but in how the harmonies darken as she sings of having “kissed and had to pay the cost.” Add in Flick’s breathless blues abstraction, and it becomes the perfect torch song for the #MeToo era.