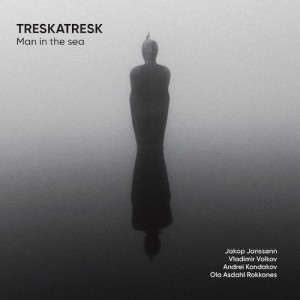 If Treskatresk’s Man In The Sea mostly evades American vernacular jazz and blues, it offers plenty of unique strains of its own—not to mention more than a little experimental weirdness. Sometimes, it has both at once.

What sounds like a plaintive flute in the opening of the lovely “Ballad” is in fact Ola Asdahl Rokkones’ treated saxophone. It appears again in the stately, funereal “Hospital,” this time sounding more like a bass clarinet—and alongside similarly affected drums, Jakop Janssønn replacing his snare with a djembe covered in reindeer skin. These are among Man In The Sea’s least interesting tracks, though. They and other slow tunes are pretty, but conventional, even with their deceptive tonal palettes. It’s on the upbeat numbers, where the rhythmic element is used as something more than incidental, that things get hip: “Wild Dog” is served by a bass line and syncopation that nearly, but don’t quite, evoke hard-bop before the piano and saxophone negate the flavor. But “Kabelvåg” is the album’s outlier, an avant-garde soundscape, the opening portion comprising quiet saxophone and arco bass groans. It haunts, it intrigues and it might be worth exploring in greater length and fuller detail on a project of its own. However, it’s thoroughly out of place in this expanse of thoughtful, folk-derived melody and groove.