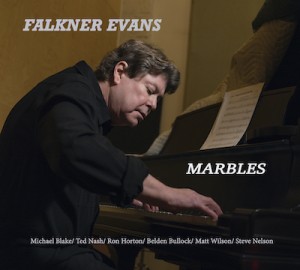 When Falkner Evans’ quintet album The Point Of The Moon came out in 2011, it marked a significant departure for the New York-based veteran pianist and celebrated composer, whose three previous discs were trio dates. Now, with the release of the sextet recording Marbles, Evans expands his harmonic horizons further with the inclusion of a three-horn front line. The music—nine Falkner originals and an album-closing snippet of “Things Ain’t What They Used To Be”—is flush with ensemble interaction, and Evans and company do a brilliant job blending the intimacy of a piano trio with the dynamic flash and larger tonal palette made possible by the additional instrumentation.

Evans proves himself an expert orchestrator with a knack for voicing three-part harmony and combining brass and woodwind timbres in unexpected, yet extremely effective, ways. In addition to drummer Matt Wilson, bassist Belden Bullock and trumpeter/flugelhornist Ron Horton, fresh sounds at the leader’s disposal include Ted Nash’s vibrant alto saxophone and fat-toned flute, and Michael Blake’s gritty-spitty tenor and stately soprano. On three tracks, guest artist Steve Nelson contributes masterful, tasteful vibraphone to the instrumental mix; his presence on Marbles is the icing on the cake.

The album kicks off with “Pina,” a romantic number that rides a bolero-like groove and seduces with its mysterious-sounding, overtone-rich blend of flute, soprano and trumpet. “Civilization” is a medium swing—established by Wilson’s steady, lazy ride cymbal—that puts a subtle twist on standard song form by embedding an improvised tenor passage into the head of the tune. Evans comes to the fore on the hushed “Sing Alone,” which starts with a dreamy rubato piano intro, heavy on the sustain, eventually leading to an especially introspective solo turn from the leader. “Global News” is a medium-up jazz waltz with a driving bass line and horn parts that smoothly shift from unison to harmony and back again. The album reaches dramatic peaks when Nelson makes his solo entrance on “Hidden Gem,” spinning skyward in an uplifting spiral of mallet strokes that occasionally evoke a sunny steel-drum vibe. The title track, a major highlight, is notable for its symphonic-style horn swells, tricky syncopation, prominent vibraphone and a taut piano improvisation that’s cleverly crafted and eloquently stated.

With Marbles, Evans embraces a musical dimension that’s entirely new to him, but turns out to be right up his alley.