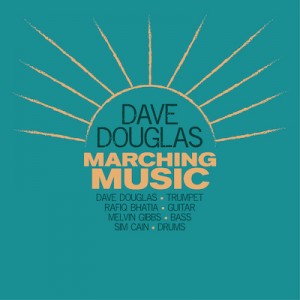 Listening to Dave Douglas’ Marching Music, one can’t help thinking he composed the songs in a state of depression, perhaps convinced that Donald Trump would win a second term as president. How else to account for the slogging, foreboding darkness that pushes against the martial optimism usually anticipated in such music? Maybe, this is Douglas’ march to Dante’s Inferno.

For a man who has bestowed dedications to intellectual provocateurs from Hannah Arendt to Noam Chomsky, the trumpeter has made himself a patron of eclectic expectations. But it’s appropriate to mention Trump here, since Douglas’ mission on Marching Music is one of social justice; to create music to ring in your earbuds when you demonstrate in your next voting-rights march. This places the album at a distance from Sousa in a tradition of jazz protest pioneered by Roach, Mingus and Coltrane. But his politics are oblique—no overt ideology is built into Douglas’ music beyond song titles and their inherent pessimism. His political intent is clear, but shouted from the sidelines.

From the first notes, his music emits a spooky, dirge-like gravitas, often accompanied by booming stings of impending danger. Douglas is the principal acoustic voice, cradled in the electronic thunder of bass and guitar. It is a clear and fluent voice, though, that in the end puts music above politics. His trumpet has a statuesque dignity weaving into Rafiq Bhatia’s echoey lines on “Parables” and a pearly muted discretion on “Ten To Midnight.” The only time the music seems to crack a smile and get some pep in its step is on “Foley Square,” where Douglas is at his most nimble in the lower register.