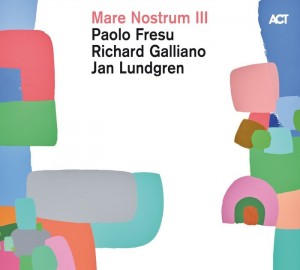 Many jazz fans have been swayed by shiny wrapping paper only to find that the gift itself was disappointing. This can happen when one impulsively buys an album solely on the basis of its personnel. But Mare Nostrum III—the third album in a trilogy by Italian trumpeter Paolo Fresu, French accordionist Richard Galliano and Swedish pianist Jan Lundgren—is a case of the music being just as impressive as the stellar reputations of the players.

The 15-song program contains four original compositions by each member of the trio, along with winning renditions of the Italian classic “I’te Vurria Vasà,” Quincy Jones’ “Love Theme From ‘The Getaway’” and Michel Legrand’s “The Windmills Of Your Mind.” On the latter, a molasses-like tempo enhances the track’s poignancy. Heavy on ballads and relentlessly focused on gorgeous tone, this tearjerker of an album should be issued with a box of tissues. The album’s producer, René Hess, ensures that there’s plenty of “air” in these spacious arrangements, so that listeners can luxuriate in each instrument’s seductive timbre.

A track like Galliano’s “Le Jardin Des Fées” (a tribute to the late violinist Didier Lockwood) demonstrates the powerful impact of blending the tones of these three musicians. The track also illustrates selflessness: Although it is a Galliano composition, the arrangement gloriously highlights the work of Fresu and Lundgren. Fresu’s “Human Requiem” pairs his muted trumpet with Lundgren’s delicate pianism. And the trumpeter’s “Perfetta” provides a forum for swooning segments by Galliano and Lundgren. Mare Nostrum III—a gem of extraordinary, invigorating beauty—is the collaborative product of three confident veterans who know when to pass the baton and step out of the spotlight.