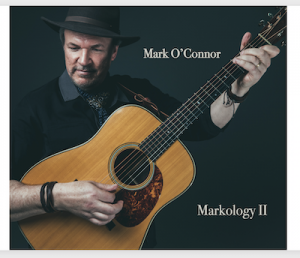 To say that Mark O’Connor is a remarkable musician is an understatement. In his career as a violinist, he made his Grand Ole Opry debut as a teenager, toured with Stephane Grappelli, worked with David Grisman and the Dregs, wrote many classical works and remains an important figure in the category-blurring New Acoustic Music movement. O’Connor has been so consistently busy as a violinist and a composer that it is easy to forget about his guitar playing.

Back in 1978, O’Connor recorded Markology, a wide-ranging album that showcased his guitar in a sextet with two other guitarists, two mandolins (including Grisman) and bass. Markology II features him as a solo guitarist on six traditional melodies, “On Top Of The World” (which was on the original Markology) and three of his originals.

O’Connor can improvise ridiculously fast lines with ease while clearly articulating each note. On beloved numbers as “Beaumont Rag” and “Alabama Jubilee,” his ideas fly by at a blinding speed, but O’Connor also displays an obvious joy at embracing a strong melody such as “Goin’ Home” and “Shenandoah.”

While listeners can debate if this is a jazz album, they can’t argue that the guitar playing on Markology II is less than brilliant.