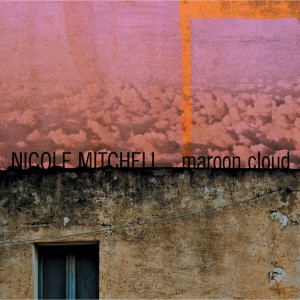 Flutist Nicole Mitchell attaches at least three meanings to the title of her new disc. One reference is to the dark color itself, another honors the Maroons, Africans who resisted slavery in the Caribbean. And the third sense of the word denotes creativity springing from isolation—or being marooned. These intertwined connotations ultimately enhance a sense of joy that runs through the album’s eight interconnected parts.

Mitchell and cellist Tomeka Reid are longtime collaborators, while pianist Aruán Ortiz and vocalist Fay Victor are newer partners. Even without significant time spent as a working unit, their dialogue comes across clearly on this recording of a 2017 Brooklyn performance.

Maroon Cloud primarily conveys Mitchell’s depictions of black resistance through her continuing fascination with Afrofuturism, which the group blends with blues on the stellar “Vodou Spacetime Kettle.” The piece begins as Victor’s tribute to Bessie Smith, and then Ortiz’s accents push her further upward. As the vocalist repeats key lines, Reid and Mitchell’s counterpoint builds throughout the piece. That feel also shapes “No One Can Stop Us,” when Mitchell and Reid engage in a sharp call-and-response with Victor, as she repeats the title phrase, turning it into a mantra for perseverance. Classic echoes of Rahsaan Roland Kirk and Brian Jackson’s combination with Gil Scott-Heron run throughout, but this group remains individualistic. That’s particularly vivid with Mitchell’s own remarkable tone when she careens through its higher register on “Hidden Choice” and then shifts into rougher terrain for “Constellation Symphony.” This narrative ends on notes that sound simultaneously serene and incendiary.