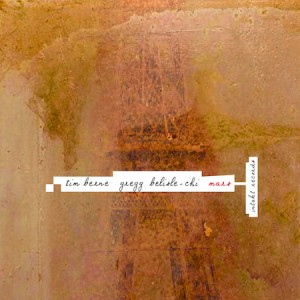 Since the 1980s, alto saxophonist/composer/record company micro-mogul Tim Berne has operated in multiple settings, releasing albums with prolific regularity and restlessly creative energy. Something relatively new is afoot with his new sax-acoustic guitar duet with Gregg Belisle-Chi, of the sort we haven’t heard since Berne’s fascinating and now hard-to-find 1984 duet recording with Bill Frisell, Theoretically.

Critical backstory: Nimble-fingered guitarist Belisle-Chi worked his way into Berne’s world via his impressive 2021 solo guitar album Koi, interpreting Berne’s music. Not surprisingly, given the guitarist’s sensitive approach to Berne’s musical language, they get along famously in a duet context. Conversation flows freely between them, with digressive chatter and contrapuntal spiciness in the mix to keep things lively.

Despite the serious nature of Berne’s music and playing — though never brooding or lacking in drive or energy — his innately, wily sense of humor sneaks in via his song titles. Some of the tracks here relate to the eating arts, as in “Gastrophobia” (fear of eating?), “Big Belly” and “Microtuna.”

Opening the album, the punningly named “Rose Bowl Charade” sets the stage for what’s to come, through Berne’s melody line. Nattering, stuttering heated notes peel off into angular flurries and generally keep our ears in suspended mode: Berne’s happy place. Sentimentality has no sway here, as is Berne’s wont, but he can find angular roots to heartfelt expressions.