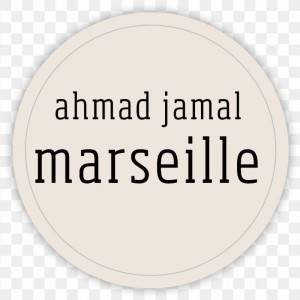 Pianist Ahmad Jamal’s new disc, Marseille, is a love letter to the titular town, a celebrated coastal city in southern France. The album features three versions of Jamal’s composition “Marseille,” and each one is distinct enough to warrant its inclusion: The album opens with a percussion-centric instrumental version; at the program’s midpoint, there’s a rendition with a compelling spoken-word recitation in French by rapper Abd Al Malik; and the album closes with a romantic, ballad version on which Mina Agossi sings in French and in English. Jamal’s original compositions are complemented by jaunty, uptempo arrangements of two songs that artists often deliver with a mood of lamentation: the traditional tune “Sometimes I Feel A Motherless Child” and the standard “Autumn Leaves.” Throughout the program, Jamal emphasizes repetition, and his arrangements often highlight percussion, as he coaxes strong performances from bassist James Cammack, drummer Herlin Riley and percussionist Manolo Badrena, whose toolkit includes bongos, congas, cowbells, rainsticks and wood blocks. While most of the material is upbeat, Jamal offers an introspective mood and lovely, fluid pianism on “I Came To See You/You Were Not There.” This album would make a fine addition to any jazz lover’s collection, whether it’s a newcomer who’s just now discovering this DownBeat Hall of Famer, or a longtime fan who’s been following Jamal since his landmark 1958 album At The Pershing: But Not For Me.