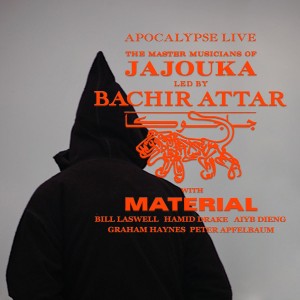 Produced by Bachir Attar and Bill Laswell, Apocalypse Live has the overall feel of a jam session, with the usual array of worldly overtones. Led by Attar, Morocco’s Master Musicians of Jajouka are joined by Laswell’s Material band as they inject a synthesis of Western funk and incessant modal vibes. That the Master Musicians aggregate pre- dates most of us—at least according to the late William Burroughs, who referred to them as “the 4,000-year-old rock ’n’ roll band”—is certainly a stimulating element.

This is trance music, by way of North Africa, with jazz-infused playing courtesy of cornetist Graham Haynes and reed player Peter Apfelbaum. “The New And The Ancient” signals this, as Haynes’ horn is given lots of leeway to stretch within the group’s rangy, folksy backbeats. It’s a sound that puts Haynes and Apfelbaum (along with Ahmed Bakhat on violin) on the front lines. Bakhat is featured on the waltzing “Dancing From The Heart,” his bow surrounded by grinding percussion, and “The Bird’s Prayer” presents even more variations, Laswell’s bass moving with a sound both ancient and modern.