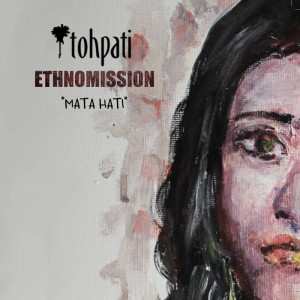 Indonesian guitarist Tohpati’s Mata Hati begins with a bang. “Janger” has all the East-meets-West sizzle of a soundtrack theme, with plenty of intrigue and dramatic contrast to boot. Add the Czech Symphony Orchestra and you get a blast of fusion electricity that even incorporates the exotic sounds of India and the South China Sea.

“Janger,” tightly arranged, rocks hard but avoids being larded up with prog-rock blasts. The intensity continues with “Pelog Rock,” which subtracts the orchestra but remains just as powerful, courtesy of another robust arrangement and tight unison lines between Tohpati and Diki Suwarjiki’s suling flute. Here, the music transitions into the first real jam session, as the guitarist shreds his Allan Holdsworth bonafides and takes his band on an improvised journey, only to return to the song’s imaginative theme. It’s busy, almost fussy, but never loses sight of the groove.

“Tanah Emas” continues along the lines of that brisk guitar/flute delivery, but in a more relaxed way, allowing bassist Indro Hardjodikoro to offer some of his own lines. Meanwhile, Tophati’s intense melodic ideas suggest he’s been spending time listening to a lot of his Western forebears. It’s pop. It’s jazz. A clever mix of tunefulness and budding virtuosity.

Each tune follows the other organically, with a perceptibly narrative sense. Again, Suwarjiki’s lively and haunting flute is determinative, this time on the gently swinging title cut (he also doubles on tarompet, an Indonesian clarinet). Tophati spreads his wings on the album’s best showcase of his talent, “Berburu,” allowing for a slight loosening of what is otherwise a fairly tight-running ship.

The spritely rockers “Reog” and “Amarah” both mirror the guitar focus of “Berburu” making obvious his technique and acumen as bandleader. Again, Tohpati’s connection with Suwarjiki proves essential.

Mata Hati is Tohpati’s followup to 2010’s Save The Planet. The rest of the band features percussionist Endang Ramdan and drummer Demas Narawangsa, who, when not featured, provide session-like support.

At times, there’s a formulaic quality to the music, sounding almost like a reflex as the band’s tightness threatens to work against itself, with little or no breathing room. But then, that may be part of Ethnomission’s mission: to create restless, seriously organized music with traces of breathing room—if you can find it. DB