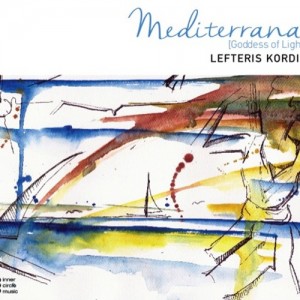 Some 70 years after Dizzy Gillespie incorporated Afro-Cuban rhythms into the big-band context, jazz today regularly takes its cue from global musical traditions. A prime example is the colorful, highly intelligent blend of modern jazz elements and aspects of Mediterranean folk-song found on Mediterrana (Goddess Of Light), the fifth album as a leader from Lefteris Kordis, a Boston-based pianist and Berklee College of Music professor who is a native of Athens, Greece.

This delightful work is clearly in the modern-jazz camp, but retains a distinctive Hellenic flavor, extending the leader’s efforts to expose Eastern Mediterranean music to an appreciative audience. Kordis, a well-known instrumentalist in the international Hellenic community, and his wife, the singer Panayota Haloulakou, are the organizers of the bimonthly Café Aman Fest Mediterranean Folk Music Festival held in Brighton, Massachusetts. The festival typically includes musicians from Greece, Turkey, Italy, Syria, Israel, Egypt, Armenia and the United States.

The CD continues the celebration of Mediterranean musical sounds, featuring traditional instruments such as the ney, or bamboo flute, played by Harris Lambrakis, and the laouto, or Greek fretted lute, used by Vasilis Kostas, in a set of mostly original contemporary jazz tunes. In addition to Kordis’ centerpiece trio with drummer Ziv Ravitz and bassist Petros Klampanis, the personnel also include Roni Eytan on chromatic harmonica, Alec Spiegelman on clarinets, Sergio Martinez on cajon and claps, and Kordis on a Korg Sigma analog.

The marriage of jazz and Mediterranean folk-song works perfectly. Lambrakis’ breathy, bended notes on the opening track, “In the Land of Phrygians,” have a bluesy resonance that fits the jazz context, and Kostas’ wailing inflections, common in Hellenic folk music but rarely heard in jazz, add to the cross-cultural atmosphere of this project, which, according to the album packaging, is “for and about a girl who appears in such various forms as a Saracen woman,” a nomad of the Syrian and Arabian desert during the era of the Roman Empire. Kordis plays brilliantly throughout, showcasing both a light touch and extreme capacity for invention on “The Raven And The Fox.”