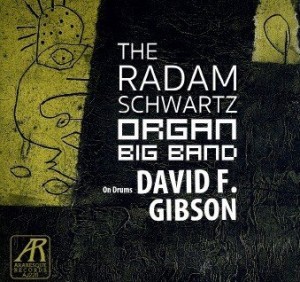 It’s not every day you encounter an album that claims to accomplish an unprecedented instrumental feat. In his liner-notes essay to Radam Schwartz’s Message From Groove And GW, Ron Scott writes, “This is the first time an organist has roared thru an entire big band album playing bass lines on each track.”

The album title pays tribute to two of Schwartz’s heroes: organist Richard “Groove” Holmes (1931–’91) and big band leader Gerald Wilson (1918–2014). While studying Holmes’ collaborative work in the ’60s with Wilson, Schwartz was particularly intrigued by a couple of tracks on which the bass parts were played by the organist (rather than a member of Wilson’s orchestra). Schwartz took that idea and ran with it, recruiting tenor saxophonist Abel Mireles’ Jazz Exchange Big Band and drummer David F. Gibson (whose resume includes work with Odean Pope and Jimmy Heath) for an hour-long album attributed to the Radam Schwartz Organ Big Band.

Like many other sterling big-band albums released this century, the secret sauce for Message is not the instrumentation or the arrangements, but rather the material. In additional to original compositions from band members (including three by the leader), the group surveys a delightfully eclectic batch of tunes by Bach (“Von Gott”), John Coltrane (“Blues Minor”), Charles Mingus (“Work Song”), the Isley Brothers (“Between The Sheets”) and Carolyn Franklin (“Ain’t No Way,” a hit for the composer’s older sister Aretha).

The program opens with the leader’s “Trouble Just Won’t Go Away,” which swings like a gate, followed by a muscular take on “Blues Minor,” sculpted here as a swinger with plenty of space for solos from Schwartz, Mireles, alto saxophonist Danny Raycraft and guitarist Charlie Sigler (who shows a debt to Wes Montgomery in a couple places on the album).

Schwartz’s bluesy arrangement of “Work Song” illustrates the peanut-butter-and-jelly-like perfection of showcasing the organ in a big band, as trumpeter Ben Hankle, trombonist Andrae Murchison and athletic alto saxophonist Anthony Ware blow mightily before the leader steps in with his own groovy, greasy lines. Each step of the way, it’s obvious that the band feeds off the energy of the soloist, and vice-versa.

Schwartz and Gibson produced the album, leaving in some slight roughness around the edges to give the program an immediacy, allowing listeners to imagine they’re sitting in the control room at Sound On Sound Studios in Montclair, New Jersey, as the large ensemble struts and shouts with glee.