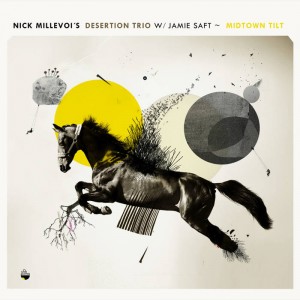 Many of the compositions that guitarist Nick Millevoi has been toying with for the past several years feel like exposition. With his Desertion Trio, Millevoi churns over dusty tones reminiscent of a Spaghetti Western soundtrack, if Ennio Morricone chose to spotlight an appreciation for high-minded jazz scaffolding and noodling psych-rock jams. Midtown Tilt, the bandleader’s second effort with his desert-themed group, continues to benefit from the whirring of Jamie Saft’s organ, which adds a shot of soul to the proceedings. On Millevoi’s 2016 effort, Desertion (Shhpuma/Clean Feed), the guitarist still seemed to be grappling with the premise of the newly constituted ensemble. Here, it moves toward fruition.

For a listener dropped into the middle of any of these seven compositions, it’d be difficult to differentiate between tracks; these tunes aren’t for whistling. But Millevoi has worked to find a highly specific setting for his shredding. And Midtown Tilt offers time—and space—for him and Saft to get free. “The Mynabird” ventures into jazz-rock territory, while “It’s A Hard World For Little Things” counters that aesthetic with relatively easy-to-resolve melodic figures and a decidedly doleful pacing. “Numbers Maker,” which opens with Saft and drummer Kevin Shea pirouetting around each other, momentarily disrupts the rhythmic similarities within the program. It also further establishes Millevoi’s compositional capacity as he expounds on music that could have come from any time during the past 40 years.

Millevoi and his troupe are still on the ascent. Whatever they come up with next likely will build on the successes of the highly satisfying Midtown Tilt.