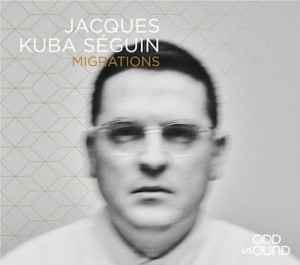 Recent albums by Montreal-based trumpeter Jacques Kuba Séguin have explored string sections and the subtle use of extended techniques, but on his new album, Migrations, he pares back to a sextet framework to deliver a straightahead, decidedly cool-inspired set. The arrangements offer fewer surprises than some of his other work, but the simpler setting brings the bandleader’s dramatic sense of melody to the fore.

Happily, there are nods to modernity to keep Migrations from being simple era-worship. The dark, rattling intro to “Première Neige (You’re Not Alone)” adds a distant taste of Radiohead to its bittersweet cocktail—sort of an aural absinthe rinse. The stuttering breakbeat that opens “Origine” hardly is shocking to hear in modern jazz, but still stands out in context. Jean-Michel Pilc’s melancholy piano solo in the middle of the track is a bigger surprise, and one whose presence lends weight to the theme. Mostly, though, Migrations is fairly classicist in tone, Séguin occasionally getting into impassioned, tempestuous territory with Olivier Salazar’s vibraphone working in particular to bathe the compositions in soft light.

Purportedly, all of Migrations’ compositions were inspired by interviews Séguin conducted with people from a variety of backgrounds across Quebec with the intention of shedding “light on the miscegenation of culture.” It’s difficult to suss out how this actually plays into the music—and it’s maybe a dubious choice of words. But this is perhaps just a matter of insufficient context. Whatever the intellectual underpinnings, the emotional response to Migrations would likely remain the same. It summons a sensation akin to a cool breeze: plenty familiar and not too unpleasant.