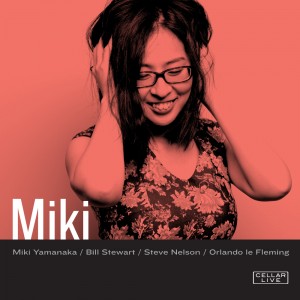 Even if the song titles weren’t playful, pianist Miki Yamanaka’s writing would radiate a unique buoyancy across her jubilant debut.

After contributing to Roxy Coss’ The Future Is Female earlier this year, Yamanaka has issued Miki on Cellar Live. And the wholly acoustic endeavor finds the bandleader’s compositions frequently referencing something everyone can get behind: good food. With an early reference to pancakes, Yamanaka shuttles her quartet through a few tunes, including “Monk’s Dream,” on the way to “Sea Salt” and “Stuffed Cabbage.” That latter tune, which opens with shimmering cymbal work and a boisterous beat contributed by Bill Stewart, turns to a knotty progression before segueing into “Book,” a tune displaying Yamanaka’s pianistic elegance on an all-too-short composition.

Steve Nelson’s vibes prominently figure into “Wonder,” a late-in-the-program reminder that the veteran of Dave Holland’s troupe could have been used to fuller effect here. But by the time “What About Food” closes out the recording, there’s little else to object to.

“You have noticed by now how much I love food,” the pianist wrote in a description of her compositions. “All I wanted to express on this project was me, myself, Miki, who always thinks/talks about food.” After taking in the 10 cuts on this album, folks’ll definitely keep that in mind, as well as the undeniable promise displayed on Yamanaka’s first outing as a leader.