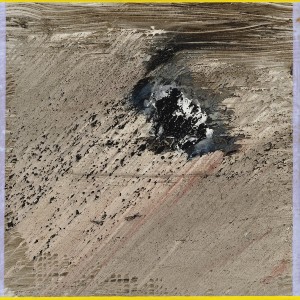 Much music has been made in the last year and a half with a mind toward coping with the state of the world and oneself. Some of this music sought to make you dance — even if it was home alone — and some of it sought to make you think, feel and beyond. Here, Joshua Abrams and Chad Taylor seek to maintain their minds and ours. The duo, who have been playing music together in one form or another since 1994, take up guimbri and mbira, instruments African in origin, with the end result proving almost meditative.

Abrams and Taylor first tried the combination of guimbri and mbira for a show at Chicago’s Museum of Contemporary Art, then took the idea into the studio with engineer Cooper Crain (Cave, Bitchin Bajas).

On “Entrainment,” the two take a simple pattern and let it unfurl slowly as notes bounce around each other. By limiting themselves to these two ancient acoustic instruments, they exhibit brilliant use of space. You practically feel like you’re in the room with them as their tools buzz and pulse together. The wonderfully playful “The Ladder” creates the sensation of climbing up and down one. The longest track here, “Valence,” explores a darker side of their simple formula in a manner that well displays Abrams and Taylor’s 27 years of experience playing together.

Sometimes one does wish these song would reach out a bit. “Slack Water” is aptly titled. And it’s difficult to say what use there would be for more of this. You’d need to add some instruments to grow this idea, naturally.

Still, this recording feels like a great choice for an evening of close listening on the home stereo system, or as a pleasant distraction in your earbuds as you go about your daily routine.