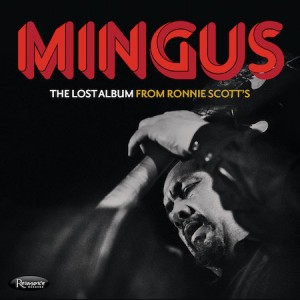 Just to whet your appetites for Record Store Day on April 23, one day after the 100th birthday of the great Charles Mingus, here’s a pearl delivered by our friends at Resonance Records. Mingus: The Lost Album From Ronnie Scott’s is not so much a lost record as a shelved record. Thankfully, it’s available now. Back in 1972, the iconic bassist and composer had just turned 50 and his career was experiencing a renaissance. This is something to be astonished by now. How could Mingus’ entire career not be embraced, lauded, enjoyed and placed appropriately on a pedestal? Thus is the fickle finger of fate. That aside, during this period, Mingus was in the midst of newfound fame and respect. He received the prestigious Guggenheim Fellowship; his autobiography Beneath The Underdog came out to acclaim; he released the incredible big band album Let My Children Hear Music; and Alvin Ailey, one of the greatest choreographers in modern dance history, had created The Mingus Dances in conjunction with the Joffrey Ballet and complete with music from, of course, Mingus. (A re-staging of this last item would be a worthy pursuit for this Mingus centennial celebration.) The Lost Album finds Mingus in a sextet setting at the end of a European tour finishing up at London’s famed Ronnie Scott’s. The setting and timing seemed perfect, and Columbia Records sent a mobile recording truck to the club to tape the group for two nights. But the tapes languished for some 50 years because in 1973, Columbia dropped its entire jazz roster — except for Miles Davis. The story of how the tapes came to light is beautifully laid out in the extensive liner notes that accompany this three-LP (or three-CD) package. The story is fascinating, but the music is even more incredible. The sound of the recordings offers a pristine time capsule of one of the greatest artists in jazz with a group that measures up to his music. Just hearing Mingus introduce the first song, “Orange Was The Color Of Her Dress, Then Silk Blues,” sets the scene and sends a chill. The band was a new configuration of his sextet with old hands Bobby Jones on tenor saxophone and Charles McPherson on alto saxophone, but newer members fit right in: Roy Brooks on drums, John Foster on piano and a 19-year-old Jon Faddis on trumpet. They cook through the nine tunes on this package, culled from the two nights of performances. The highlights are aplenty. For this reviewer, there is nothing better than hearing Mingus’ solo introducing “Noddin’ Ya Head Blues.” No matter how far out the master took his music, he always carried the blues at his side. The solo slides beautifully into a true treat with Foster adding his gut-bucket vocals, complete with a shout-out to Eddie “Cleanhead” Vinson. The musicianship throughout recognizes Mingus’ love for music that was complex without being pristine — “organized chaos,” as McPherson calls it in the notes. There’s also the sheer humor and musical activism of Mingus and his crew. How do you not love a tune called “Mind-Reader’s Convention In Milano (AKA Number 29)” or the classic “Fables Of Faubus,” a tune that aimed to country-fry the governor of Arkansas for his attempts to stop racial integration at a high school? And, back to the blues, when Brooks pulls out a solo on the musical saw, he brings down the house. It’s such beautiful chaos — from “Ko Ko” and “Pops (AKA When The Saints Go Marching In)” to “The Man Who Never Sleeps” and the closer “Air Mail Special.” One last note, what a pleasure it is to hear Faddis as an upstart in this setting. He’ll light your hair on fire with his high notes and crazy chops — and so will this entire album. Mingus: The Lost Album From Ronnie Scott’s is as good a live jazz record as you will ever hear.