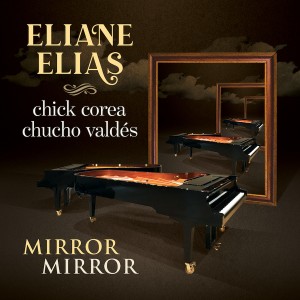 The chemistry between Eliane Elias, Chucho Valdés and Chick Corea on Mirror Mirror is an artistic marvel. Each individual’s style is fascinating enough to tempt meticulous analysis, but the album’s contextual background encourages an experiential than theory-minded ear.

Elias and Corea discussed collaborating repeatedly before this record came together and the two finished their sessions not long before Corea’s passing in February. The need to find another player to compile a full album of music brought Valdés into the picture; his presence gives Mirror Mirror its multidimensional musical blend. The fluid transitions between Elias’ alternating duets with both pianists highlight both how tastefully the album’s repertoire was mixed/produced and how carefully the track listing was discerned.

“Armando’s Rhumba” draws listeners in with infallible swings between rapid, scale-patterned passages and slower breaks lined with astutely placed accidentals, adding spark to the piece. Elias and Valdés demonstrate on “Corazón Partío” how music about heartbreak doesn’t need a despondent melody or sluggish tempo. A saddened sentiment radiates more subtly, through phrases with half-resolved chords, revealing disappointment without loss of emotional resolve. Corea’s duet with Elias on “There Will Never Be Another You” offers sprightly energy for the closer. However, the piece serves as the finale well. The song coincides with two truths, beautiful and painful, while offering melodically uplifting character that feels comforting in its compositional directness, particularly when juxtaposed against the nebulous grief that’s mixed into the making of this album.