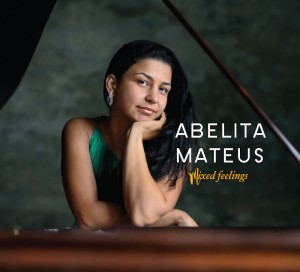 On her second album, and her first self-produced effort, Abelita Mateus shows off an impressive ability to synthesize the sounds of her Brazilian home with jazz, the music that inspired her move to the States. Born in São Paulo, Mateus studied classical piano in her teens, but it was the sound of jazz, and the opportunities it offered for improvisation, that truly inspired her.

In Brazil, she played professionally with first-tier musicians, including Hermeto Pascoal. After moving to New York and studying jazz at William Paterson University, she met Grammy-winning guitarist Romero Lubambo, who produced her debut, 2017’s Vivenda; he sits in again on Mixed Feelings. On “Vamo N’eca,” he adds acoustic embellishments, engaging in a playful call-and-response with Mateus’ piano during the tune’s coda, and complements her quiet vocal and minimal Rhodes on songwriter Djavan’s “A Ilha.”

The title track opens with drummer Alex Kautz supplying a subtle samba rhythm to support the harmonic variations Mateus lays down with the help of Peter Slavov’s bass. The remaining tracks delve into the pianist’s love of jazz, generously granting her bandmates ample opportunity to show off impressive chops. On “Paizinho (Little Daddy),” Mateus dances around the melody, trading phrases with Matt Maranta’s tenor. “Patience” lives up to its title with a laid-back tempo, highlighted by Slavov’s bass solo and the ticking of Kautz’s snare. “Ligia” lets Mateus explore her improvisational skills, closing the album on a bossa nova pulse that’s more implied than stated outright. Currently, Mateus splits time between the Dizzy Gillespie Afro-Cuban Experience and her own Chameleon Music Trio, each situation allowing her to exhibit the range of her vocal and improvisational skills.