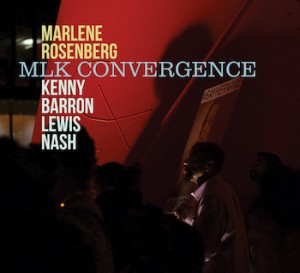 If you don’t know bassist Marlene Rosenberg from her work with Paul Wertico or Ed Thigpen, OK. But she’s gigged with a virtual murderers’ row of players and had Makaya McCraven in her group before most folks had heard the drummer’s name.

Origin label honcho and drummer John Bishop had been paying attention, though.

“The first time I noticed her was when she was in Joe Henderson’s band with Renee Rosnes and Sylvia Cuenca back in the late ’80s,” he wrote in an email. That group issued the live set Punjab in 1990, Rosenberg taking a writing credit for “Blue Waltz.” “But she’s done thousands of gigs over the decades; one of us jazz worker bees.”

As playful, sturdy and vaguely funky as the material is on MLK Convergence, the album’s title works to reference the civil rights icon as much as the first letters in the names of the trio’s principal members, which in addition to Rosenberg includes drummer Lewis Nash and pianist Kenny Barron. Apart from a track featuring Christian McBride doubling-up on bass, “And Still We Rise,” and the album closer, “Love’s In Need Of Love Today,” most of MLK Converge doesn’t feel overwhelmingly political. But “Not The Song I Wanna Sing,” the only cut here with vocals, offers up lines from guests like, “Rogue killer cops take black lives that do matter/ Minor traffic stops that end with blood spatter” over an acoustic groove suitable for A Tribe Called Quest to have sampled in 1994. Rosenberg, who’s been based in Chicago since the ’80s, also makes certain to mention the 2014 shooting of Laquan McDonald, a 17-year-old slain by a city policeman.