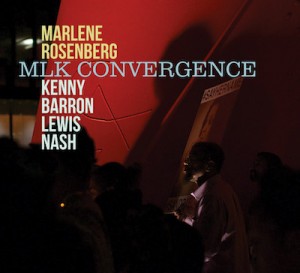 Hope emanates from Stevie Wonder’s “Visions,” with Rosenberg poignantly bowing the melody, and “Love’s In Need Of Love Today,” which makes for a moving closer. The calls for equality and peace ring out among a litany of all too familiar outrages, rapped by Rosenberg and guests Thomas Burrell and Robert Irving III, with Christian McBride joining the bandleader in a vigorous tandem showcase. McBride also guests on “And Still We Rise,” a funky, sharply executed Rosenberg tune featuring another bass duet. Its title’s also a sort of pun on a Maya Angelou poem (“And Still I Rise”) and on the irony of bass players taking the top line. That track and Rosenberg’s poignant rendition of Barron’s gorgeous ballad “Rain” are the album’s best, with her bright, uptempo tune “The Line Between” inspired by the marches in Selma, Alabama, not far behind.

Elsewhere, the album flags a bit, certainly not because of the playing—the trio meshes organically and swings mightily—but because Rosenberg’s other tunes lack the kind of definition and framing that catch the ear. Still, it’s a strong album with a timely and welcome theme.