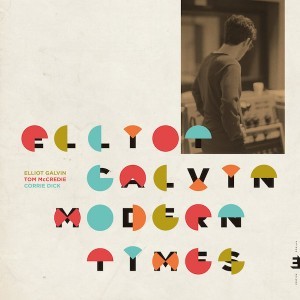 On “Ghosts,” the opening cut of the Elliot Galvin Trio’s new recording, Corrie Dick’s drumming tips in about 20 seconds after the track begins. It announces a decidedly pop-conscious consideration of the genre, but one that makes Modern Times imminently digestible.

Galvin uses the piano trio format within the confines of three­- to five-minute tunes, spinning right-hand flights into swelling waves of choppy chords. It doesn’t all actually come off sounding like pop music, and to Modern Times’ benefit, the playfulness these tunes rest upon sometimes is absent the overly serious stance listeners might associate with the jazz genre. Maybe it’s a generational thing; Polish saxophonist Kuba Więcek, another 20-something bandleader, moves in similar circles, ideologically if not sonically.

The ensemble’s setup—as well as Galvin and Dick performing together in UK group Dinosaur—enables the troupe to easily float into the odd, moody tune amid all the ebullient compositions here. “Fountainhead,” a three-minute cut about halfway through the disc, opens with a solo turn, before the bandleader is joined by bassist Tom McCredie’s arco spotlight. “Gold Shovel” and “Into The Dark” are relatively somber works, too, but offset by the playful “Jackfruit,” a tune presumably named for the meat-substitute.

The fruit, native to Southern India, isn’t exactly a staple in the States yet, and neither is Galvin. In time, though, at least one of them is going to be embraced here. Modern Times hints that Galvin’s turn likely is coming first.