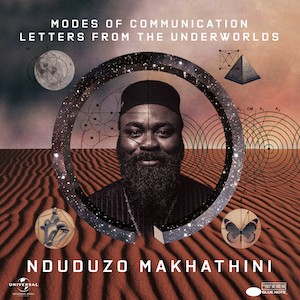 Nourished equally by jazz and its African antecedents, Nduduzo Makhathini’s Blue Note debut features noteworthy performances from all participants, in particular the bandleader’s brilliantly understated work at the piano. More importantly, it challenges us to look at the craft through a different prism.

The more this music unfolds, the more it detaches from the structures that inform most of us. Some of Makhatini’s compositions do reflect a familiar verse/chorus form, though he alters these, perhaps to thwart expectations and draw us more into the heart of what’s being played. This also creates a narrative impression: Rather than subconsciously anticipate when eight bars have ended and the bridge begins, we take in the music as we would a story being told.

Makhathini often builds these songs over a four-bar ostinato, spelling one out with gospel-like voicings at the top of “Saziwa Nguwe,” played rubato and framed by short pauses similar to breaths between sentences. When playing together, the wind instruments sometimes move in clusters, sometimes in unison. They don’t punch the groove; they conjure atmosphere.

Modes Of Communication avoids “the capitalist framework associated most readily with ‘jazz’ music,” the liner notes exert. The idea can be debated, but its thrust is correct: This is music of the spirit, released at a time when it’s most critically needed.