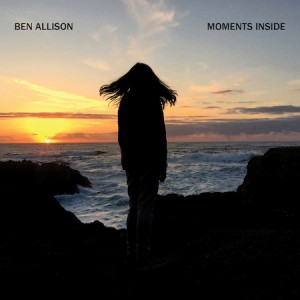 Within 10 seconds of dropping the needle on this one, the well-being center of my brain starting telling me, “You need to listen to this music as often as possible.” It was an “ahh” moment, like a Gatorade after a 10K — a replenishing source of something essential that had been depleted, or gone missing, in me. And it felt too good to pass up. As Ben Allison says in the liner notes to Moments Inside, the serene and uplifting music he wrote for this pandemic-era project, his 14th album as a leader, filled a profound need in him. The bassist and composer took the production in a bossa nova-inspired direction, assembling an electro-acoustic quartet of himself, Brazilian guitarist Chico Pinheiro, guitarist Steve Cardenas and drummer Allan Mednard for the June 2021 sessions, which were engineered by Matt Balitsaris and mixed in pristine-sounding hi-res audio. For anyone who’s been stuck indoors lately, the expansive open-air feel of the album’s opener, “Safe Passage,” comes as sweet liberation. Other highlights include Allison’s “The Chase,” with its expressive guitar flourishes and a killer electric bass solo; the saudade “Milton,” named for the Brazilian popular music star Milton Nascimento; the hero’s-journey spirit of “Voyage Of The Nautilus,” driven by ascending guitar arpeggios and rapid-fire mallet work; the perpetually descending, ever-steady footfalls of the extended blues “Breakfast With Eric”; and the gathering R&B patter of Herbie Nichols’ 1955 gem “House Party Starting.” Toward the end of the Moments Inside sessions, Allison and the gang carved out time to record a collective improvisation, which Sonic Camera will release as the companion piece Moments Outside on Feb. 15. The 24-minute, unedited track manifests as a suite of sorts, with moments of flux resolving into passages of collective cohesion like a completely realized, fully formed piece of music. Moments Outside will be available in 320K mp3 and 24-bit FLAC formats, as well as on streaming services worldwide. As to the aforementioned “needle-drop” on Moments Inside, vinyl LP pressings of the album (currently on CD and streaming) will be coming this spring and are available for preorder now.