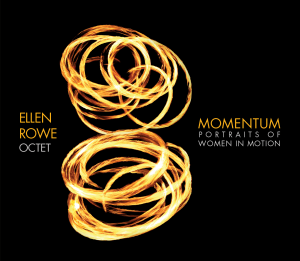 There are two ways a listener might understand Ellen Rowe’s ambitious new album, Momentum, Portraits Of Women In Motion. One would be to consider the concept, in which Rowe pays tribute to great women of politics, music and sports, and the fact that she does so by assembling a stellar cast to play these pieces. An alternate approach would be to sidestep the album’s social content and simply focus on the music, particularly the deftly voiced horn charts Rowe has written, and the soulful, Horace Silver-style groove she pulls from the ensemble.

Personally, I’d advise a bit of both. For one thing, Rowe’s writing is trying to tell a story, and if you don’t know that “Game, Set And Match” is a tribute to Billie Jean King and Martina Navratilova, then the bouncing, two-note horn shots at the beginning of the piece don’t make as much sense as when you imagine them as the sound of a volley at the French Open. But even if you don’t make that connection, it’s hard not to love the skittering drum fills Allison Miller slips between the shots, the funky boogaloo pulse she drops beneath Virginia Mayhew’s tenor solo and her hi-hat work behind Ingrid Jensen’s coolly grooving trumpet.

Rowe has recruited a high-calibre crew here: In addition to Miller, Mayhew and Jensen, she has Tia Fuller on alto saxophone, Lisa Parrott on baritone, and the astonishing Melissa Gardner on trombone. As for the listener, the experience is certainly life-enhancing. Between the writing and the playing, tracks like the deeply swinging “The Soul Keepers” (a tribute to Geri Allen by way of Mary Lou Williams) and “Ain’t I A Woman” (a civil-rights tribute that’s equal parts gospel and hard-bop) are as good as mainstream jazz gets these days.