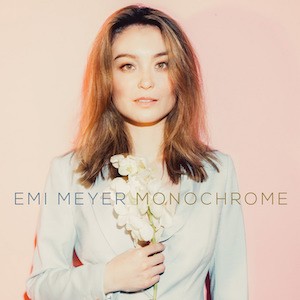 With her U.S. debut, Monochrome, singer-songwriter Emi Meyer has crafted a gem that will greatly expand her international fan base. Born in Kyoto to a Japanese mother and an American father, the Tokyo-based Meyer has released several albums in Japan, and her music has appeared on the soundtrack to Japanese director Nobuhiro Doi’s film Flying Colors and in the States on the TV shows Awkward and Younger. Though Meyer has often sung standards (and even released “Fly Me To The Moon” as a single), the program on Monochrome illustrates that her original compositions are where she shines brightest. That’s not to say that she isn’t a skilled interpreter, as evidenced by a charming rendition of “What A Wonderful World,” a tender, compelling version of Michael Bublé’s “Home” and a potent reading of “I’d Rather Go Blind” that showcases her vocal range and spotlights keyboardist Eric Legnini’s retro-leaning organ work. Meyer’s original compositions reveal a craftsperson with great vocal control and a keen melodic sense who has internalized some elements of jazz standards and allowed them to influence her work in elegant, subtle ways. Nick Phillips’ trumpet lines augment the poignancy of Meyer’s vocals on the title track, and Dan Balmer’s jazz guitar on “Flesh And Bones” complements the singer’s impressive phrasing. Elsewhere, Balmer injects a memorable solo on “Paríso,” an intoxicating original that’s flavored by Brazilian rhythms. The album opens with the cello-enhanced “Odyssey” and the piano-driven “If I Think Of You”—hummable tunes that might make fans of Norah Jones and Diana Krall feel that they’ve found a new artist to follow closely.