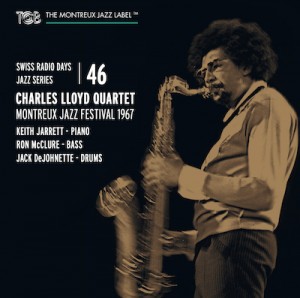 Saxophonist Charles Lloyd is renowned for fearlessly reinventing himself to explore some recently discovered facet of his personality and art.

A few years after his final recording in the band of drummer Chico Hamilton and the same year as the saxophonist’s Forest Flower was released, Lloyd took a star-studded ensemble to the Montreux Jazz Festival. Vividly depicting a band that was functioning at its peak, Montreux Jazz Festival 1967 (Swiss Radio Days Jazz Series 46) serves to fill out listeners’ understanding of Lloyd’s work with pianist Keith Jarrett and drummer Jack DeJohnette. (Ron McClure’s on bass, though Cecil McBee frequently accompanied the saxophonist at the time.)

But the bandleader’s decision to include “Lady Gabor,” which originally appeared on a Hamilton disc Lloyd helped record, is just curious given that he had decades of the genre to pick through for inspiration. Lloyd and guitarist Gabor Szabo, who wrote the tune, got their start performing in the relatively unheralded Hamilton groups of the 1960s. And while Szabo dispatched a handful of pretty memorable Technicolor leader dates, there haven’t been too many folks who’ve interpreted his songbook.

The live 1967 recording—which sports a 27-minute rendition of “Forest Flower,” replete with an intense DeJohnette drum solo—lends an air of relevance to the Hungarian guitarist’s work almost 40 years after his death. The rendition here is all entrancing flute moves from the bandleader and blocky chords from Jarrett, adding a contemplative vibe to a set of tunes that also takes a run at the pianist’s “Days And Nights Waiting,” and Lloyd’s “Love Ship” and “Sweet Georgia Bright.”