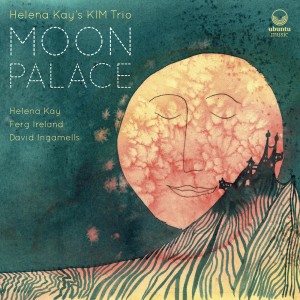 Paul Auster’s fiction is characterized by eeriness: His characters double each other, identity is destabilized and American landscapes loom large—whether the panoptical glass space of New York or the expanses of the Midwest.

On her debut, Moon Palace, tenor saxophonist Helena Kay takes Auster’s 1989 novel of the same name as inspiration. A tale of a young man searching for his identity through Manhattan and the Midwest, it’s a typical Auster novel in many respects, and the journeying nature of its central character is perfectly reflected in Kay’s languid saxophone lines.

“L And D” flits between a half-time introduction of Kay’s softly insistent playing and a swinging double-time groove during which the trio locks beneath drummer David Ingamells’ rhythms. It is a seamless sonic evocation of a bustling New York. On ballads, like “Feijão,” bassist Ferg Ireland sits comfortably behind Kay’s melodies, using his higher register to cut through a harmonic interchange without drowning out the atmospherics. A version of Charlie Parker’s “Kim”—perfectly evoking the frenzy of revelatory episodes in Auster’s narratives—is laid bare in the back-and-forth between drums and sax. And on “Moon Palace” and “Stardust,” Kay showcases the talent that won her the 2015 Young Scottish Jazz Musician award. The title track is a nocturnal meditation told through cascading threads drawn from her lower register, while “Stardust” is an emotive solo rendition of the standard, recalling John Coltrane’s balladic works.

Running just shy of 40 minutes, Moon Palace leaves the listener wanting more of Kay’s rich playing. As a debut, though, it’s remarkably self-assured and forecasts an imaginative career to come.