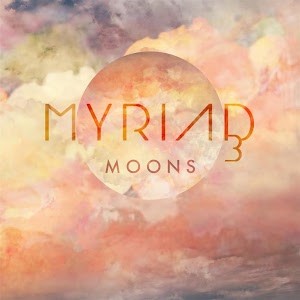 Myriad3, a Toronto-based piano trio with an explorative soul, takes the listener to the edge of a creative precipice in Moons, its third release. This collection of 11 mostly original compositions by pianist Chris Donnelly, bassist Dan Fortin and drummer Ernesto Cervini walks the line between being daring and merely being art for art’s sake. Awash in intentionally fleeting melodies, indefinite endings and disassociated elements, Moons’ darkly focused sound results from the material being “more thoroughly composed” than on Myriad3’s previous album, The Where. Myriad3 operates as “a true collective,” allowing each member to act simultaneously as a leader, sideman and composer who writes in his own distinctive style yet remains “very much informed by the others,” said Fortin.

Despite this probing commitment, certain tunes on Moons suffer from overindulgence. For instance, on the opening track, “Skeleton Key,” piano and bass drone on in lockstep while moving with a lurching gait. The piece ultimately comes off as a tedious, insipid kick-off to the album, which is the product of five years’ labor, according to the CD liner notes. The strongest tune on the set happens to be the one that sounds the least like the rest —“Counter Of The Cumulus,” which is a provocative, jazz-rock fusion cover of a composition by Richard Vreeland, better known as electronic artist Disasterpeace.

“Noyammas” is a solid track, highlighting the improvisational dialogue that is one of the trio’s strengths. “Peak Fall,” another worthy entry, opens with an alluring Donnelly solo that evolves into two-way communication between the pianist and Fortin, then allows Fortin to display his strength on the bass as he stretches out on his own.

Myriad3 road-tested the new material in live performance before taking it into the studio. The trio, who had never played together until subbing in for other musicians on a gig in 2010, frequently tour Canada, the U.S. and Europe.