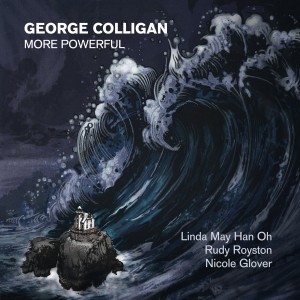 George Colligan’s 28th album as a leader, More Powerful, is a terrific addition to the discography of this skillful, highly creative pianist. For his program of nine original compositions, Colligan recruited bassist Linda May Han Oh and drummer Rudy Royston to create some excellent trio recordings, and Nicole Glover (tenor and soprano saxophone) joins in to create a few equally impressive quartet tracks. The album features numerous melodic hooks while also offering plenty of high-energy blowing, as Colligan lets each of his collaborators cut loose. “Waterfall Dreams,” one of the best jazz tracks of the year, features cascading piano lines and a compelling solo by Oh, who topped the category Rising Star–Bass in the 2012 DownBeat Critics Poll and has become a dazzling bandleader herself. Glover contributes tenor fireworks to “More Than You Could Possibly Imagine,” resulting in a track that’s as exciting as a Star Wars lightsaber duel. (Sci-fi fans will recognize the song title as a quote from Obi-Wan in Episode IV: A New Hope.) Royston adds a taut solo to the album’s fast-paced opener, “Whiffle Ball.” In the press materials for the album, Colligan says, “I love to challenge the notion of what’s contemporary and what’s old-fashioned.” He has an aesthetic that draws upon straightahead and post-bop jazz (as well as other styles), without ever feeling staid. Whether he’s crafting a lovely line, delivering a fiery riff or unleashing an intricate solo, Colligan’s music always has an impressive muscularity.