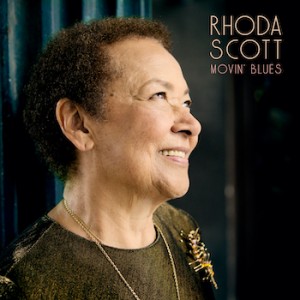 Organist Rhoda Scott’s carved out an expat life that pretty much any musician would be jealous of.

While working in Count Basie’s Harlem club, a French venue and label owner was struck by her playing one evening, and convinced her to move to Paris, where she’d release her first album in 1968.

But B-3 players, at this late date, generally adhere to traditional uses of the instrument: churchy, funky blues. And Scott’s an interpreter, not a prolific writer, generally working over classics—stuff by Galt MacDermot, Art Blakey, and Rodgers and Hammerstein.

The bandleader’s a masterful purveyor of those situations (along with her drummer Thomas Derouineau), using her skills on Movin’ Blues to take on Duke Ellington’s “Come Sunday,” while preserving a sense of the original’s passion; it’s enlarged with some slightly swinging moments. Duke’s “In A Sentimental Mood” later finds Scott wrenching all the emotion out of the composition—and her instrument—while “I’m Looking For A Miracle” swings hard enough to make listeners consider converting. And maybe that’s just what Scott was aiming for: lending listeners revelatory moments, even if they only span 14 short cuts.

That such a range of music and emotion finds itself shuttled through these duo arrangements means that U.S. jazzers for years have been missing out on Scott, who’s only made sporadic Stateside stops since setting up shop in Europe decades back.