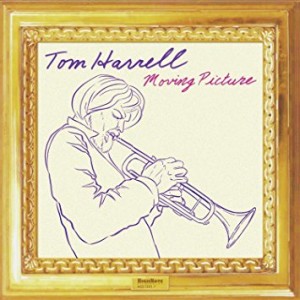 Trumpeter Tom Harrell’s new disc comes on the heels of two phenomenal previous releases, First Impressions (the subject of a 5-star review in the December 2015 issue of DownBeat) and 2016’s Something Gold, Something Blue. Those albums had clear and abundant strengths—Harrell’s poetic phrasing and luxuriant tone chief among them—but they were most remarkable for their freshness of concept. The former found Harrell inhibiting the sonic worlds of classical composers Ravel and Debussy; the latter featured a two-trumpet frontline that paired Harrell with kindred spirit Ambrose Akinmusire. Moving Picture puts Harrell in a more familiar setting: at the helm of his working quartet with bassist Ugonna Okegwo, pianist Danny Grissett and drummer Adam Cruz. The program has a homegrown feel, with 10 tracks culled from Harrell’s repertoire, and the tunes rarely stray from the trumpeter’s wheelhouse, oscillating between hard-pivoting modern jazz and warm, soft-focused balladry. Despite the relative modesty of the premise, this album is riveting. Harrell flourishes as the center of attention, slicing through knotty, fugue-like passages with characteristic precision on the title track, and burning bluesy lines into the funk-dappled surface of “Gee, A. Bee.” On tunes with rounder edges, such as “Apple House” and “Different Clouds,” he takes a coolly understated approach, framing occasional bursts of rhythmic energy with longer passages that emphasize underlying harmonic shapes. But one of Harrell’s most admirable traits is the grace with which he cedes the spotlight to his bandmates, and this album is rife with sublime moments from his supporting crew. Grissett plays with aching beauty on a solo section of “Sea,” while Cruz displays acute melodic sense with his drum solo on “Time Passage.” Okegwo, the longest-tenured member of the quartet, marches in sturdy lockstep with the leader on the melody of “Montego Bay,” and later provides indefatigable support beneath the trumpeter’s gospel-winged solo, which builds in intensity as it unfurls. More than a powerful statement in its own right, Moving Picture is proof that even in the most “standard” of situations, Harrell is capable of elevating the art form.