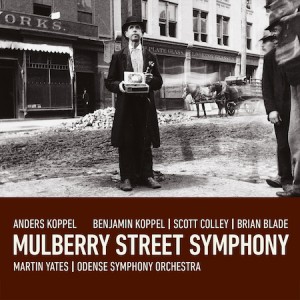 It’s difficult to say which element is the skeleton and which is the flesh in Mulberry Street Symphony — the jazz trio of alto saxophonist Benjamin Koppel (Danish composer Anders Koppel’s son), bassist Scott Colley and drummer Brian Blade, or the Odense Symphony Orchestra. The two work in tandem to achieve a sweeping narrative built from photographs of lives making way long ago; a community making moments based on moments from a community.

In his 32nd concerto for soloists and orchestra, which he describes as “more a symphony with soloists,” Anders Koppel lays out musical interpretation of Jacob Riis’ photographs of life among immigrants in 1880s New York, reminding us all that these people had soul. Koppel wrote for the orchestra, in this case the Odense Symphony Orchestra conducted by Martin Yates, but largely left the trio to their own devices.

With Benjamin Koppel taking the lead, this suite sprints, jaunts and soars. Scott Colley’s bass line starts the album off on “Stranded In The City’’ as an indication of how rooted this music is to the groove he establishes and maintains all throughout, just as integral as the beat from the legendary Brian Blade. Disc two’s “Bandit’s Roost” has the best shifting of positions and breakdown of elements one may have heard all year, pulling out all the stops of what this group of musicians is capable of doing. One may not expect a series of photographs from the 1880s to evoke “stank face,” but getting all these folks together some 140 years later to make music about it could just be taking the long way around.