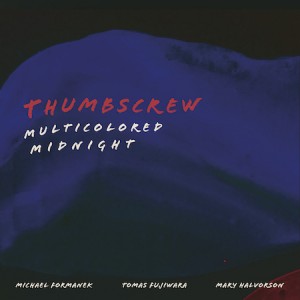 Every album Thumbscrew puts out is a cause for celebration, and Multicolored Midnight, the trio’s latest in honor of its 10th anniversary, is no exception. Guitarist Mary Halvorson, drummer Tomas Fujiwara and bassist Michael Formanek are a locked-in wonder of rhythm, beat, nuance and fun all wrapped in just the right amount of artfully indulgent snark. On “I’m A Senator,” the opening tune of this 11-track masterpiece, Formanek and Fujiwara lock into a wondrous, wallowing groove that gives the sense of an elected official waddling through the halls of the Capitol. Halvorson joins with a twisted melody that delights and surprises at each and every pluck and run. But don’t get the idea that this isn’t serious, often touching, music. Fujiwara penned “Song For Mr. Humphries” in honor of Roger Humphries, a legendary drummer in Pittsburgh, who played on Horace Silver’s classic 1964 album Song For My Father (Blue Note). Fujiwara met Humphries during one of the group’s annual City of Asylum residencies in Pittsburgh, and the 78-year-old has become a mentor and inspiration. Speaking of the City of Asylum residency, Thumbscrew has used this three-week, biennial pilgrimage to dig in and hone its music. It offers a rare, concentrated amount of time to clear the decks and create as a collective. Thumbscrew albums prove that it’s time well spent. The songs have a clear, composed feel that allows improvisational freedom, as on the Formanek composition “Fidgety,” a tune comically and aptly named. Throughout the set, the chemistry among the three is as undeniable as the precision of their playing. On the title tune, written by Halvorson, the trio grooves through complex, rhythmically challenging passages with an ease that could only come from years on the road, or through intensely workshopping the material. With all three artists writing for the group, each brings something tasty as an artist and composer. On Fujiwara’s “Future Reruns And Nostalgia,” for example, the drummer trades in the kit for the vibraphone, adding an ethereal dimension against Formanek’s arco bass vibrations and Halvorson’s inventive guitar pedal work. In a nutshell, Thumbscrew comes to us as an alt-jazz supergroup with egoless stars who get together to serve up some of the most fascinating, visceral music being made today. Check out the January 2023 issue of DownBeat for a major feature on the group. Happy anniversary to Thumbscrew — may they celebrate many more.