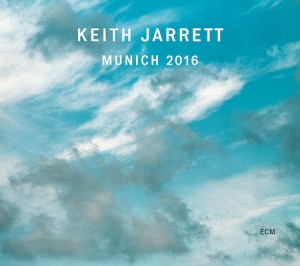 From the 1970s to the 1990s, most of Keith Jarrett’s extended improvisations—a marvel of the jazz world—were long, clocking in at about 30 to 45 minutes apiece. You can hear this in the celebrated live recordings of his solo piano concerts in Bremen, Cologne, Kyoto, Paris, Vienna and Milan. But in the 2000s, his solo pieces became shorter, hardly ever topping 15 minutes. This stylistic shift pulled attention from the capaciousness of Jarrett’s extemporaneous playing and focused instead on his freakish ability to improvise sonata-like movements on the fly.

With Munich 2016, the overall pattern in his spontaneous composing is easy to spot: He starts with a free-form exposition (Part I), returns to it ever so briefly (Part VII) and recapitulates in a raucous conclusion (Part XII). But following the first two such maneuvers, he pulls back into serene contemplation (Parts II and VIII) just long enough to obliterate expectations. In the sections that follow, he highlights tension between the segments by accelerating on gospel grooves (Parts III–IV); skipping along through breezy arpeggios (Part V); riffing on dark, sharp-edged chords (Part VI); vamping on cool blues (Part IX); and soothing with warm harmonizations (Parts X–XI).

Jarrett recorded the album at Munich’s Philharmonic Hall almost four years ago; each track ends with roaring applause echoing through that large room. The encores—three familiar standards, low on suspense, high on comfort—earned the most noise. But even on these well-known melodies, the pianist managed to find something uniquely fascinating.