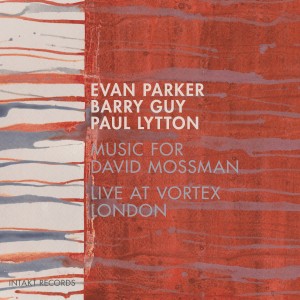 Saxophonist Evan Parker, bassist Barry Guy and drummer Paul Lytton are English improvisers, each communally active for about 50 years, while amassing empathy as a formal trio since 1980. They all are regular performers at London’s Vortex Jazz Club, and Music For David Mossman, named after the venue’s founder, was recorded live at the club in 2016, harnessing the immense energies that customarily are unleashed at the trio’s gigs.

Most of the four-piece suite operates at a fearsome pitch, but there are frequent dips into calm exploration, as the trio probes inward, just ahead of its next eruption. Their collective power usually is made up of massed details: No matter the force of delivery, there always is a vast amount of variation in the spontaneous interaction. The longest piece—the suite’s 24-minute third portion—makes digressions and takes diversions, rich in accents and elaborations, all around the edges of its propulsive heart.

Even though these players all are hovering around age 70, they each play with the tempestuousness of younger men, adding expansive layers, resulting from years of experience.