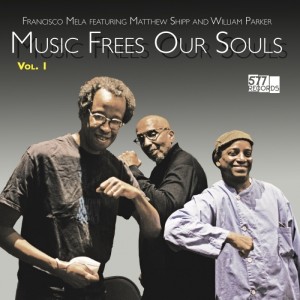 Francisco Mela is a Cuban-born drummer who has recorded with pianists Aruán Ortiz, Kenny Barron and Leo Genovese, and saxophonists Joe Lovano and Melissa Aldana, among others. Albums he’s released under his own name have featured Jason Moran, Mark Turner, Lionel Loueke and Esperanza Spalding. His approach to rhythm is highly adventurous but deeply swinging, incorporating ideas from throughout the Latin diaspora while also paying tribute to bebop and fusion. He often displays an extraordinarily light touch, as if he’d rather provide gentle encouragement to the other musicians than batter them into submission.

This is Mela’s second release for the 577 label in 2021, following MPT Trio Vol. 1, with saxophonist Hery Paz and guitarist Juanma Trujillo. Thanks mostly to the scorching guitar, that disc had a sort of “free rock” feel, with jagged melodies giving way to expansive improvisations and occasional outbursts of drum thunder. Music Frees Our Souls Vol. 1, on the other hand (and we should all hope for subsequent volumes from both these ensembles), is a free-jazz piano trio date with a surprising gentleness at its heart. On the surface, it may remind some listeners of pianist Matthew Shipp’s 1996 album Prism, with bassist William Parker and drummer Whit Dickey. As on that release, the skittering rhythm allows Shipp’s rumbling, clanging piano to anchor the music, with Parker’s bass as Zenlike moderating voice. But Mela’s solo introduction to “Infinite Consciousness” manifests explosive power, and as the track rolls out, he drops bomb after bomb.