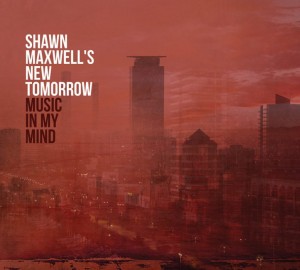 The all-original program on Shawn Maxwell’s Music In My Mind conveys the vision of a composer who’s confident in his artistic vision, and comfortable with the wide array of colors on his instrumental palette.

Maxwell—who plays alto saxophone, clarinet and flute here—recruited 11 supporting musicians for his ensemble New Tomorrow. And on his eighth album, Maxwell’s merger of written passages and improvised segments feels logical and coherent, but not overly predictable. He’s pulled off a feat that many 21st-century bandleaders strive to achieve: the creation of fresh, head-bobbing music that avoids a tiresome groove and that gives band members room to soar.

Throughout the 49-minute program, twists and shifts in time signatures elevate this music in a brainy, yet accessible, manner. The bandleader has surrounded himself with talented accompanists, and Dee Alexander’s wordless vocals on three tracks showcase Maxwell’s superb skills as an arranger. Two tracks—“King Bill” and “Glamasue”—appeared on his 2005 debut, Originals, and are recast here with arrangements that reflect Maxwell’s maturation as an artist. On “He Gone,” Maxwell’s flute, Corey Wilkes’ muted trumpet and Matt Nelson’s fusion-flavored work on Fender Rhodes give the track an engaging vibe that is retro but not outdated. A few other tracks, including the seven-minute “Another Monday,” feature distinct sections that make the songs sound like mini-suites. In Maxwell’s hands, a musical segment might seem abrupt when it initially arrives, standing in contrast to what preceded it, but by the song’s conclusion, the listener has grasped an overall sonic cohesion. It’s a feeling that grows with repeated spins of this excellent album.