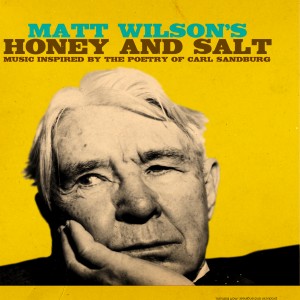 You knew Matt Wilson was headed somewhere when his first album dropped a snatch of stoic philosophy from Carl Sandburg and got Dewey Redman to play “Sweet Betsy From Pike” (which was part of the American Songbag anthology Sandburg published in 1927). The bandleader has inventive ideas about the way the arts can intermingle. Spoken word and song have flecked his largely instrumental work ever since, and he’s actively harked back to his Midwestern roots.

Wilson’s Honey and Salt group deals exclusively with Sandburg’s verse, and this new disc not only reminds us how whimsical a poet the master truly was, but also how gifted a drummer and arranger Wilson is. The program shifts and shifts, but each turn introduces a genuinely discrete approach to the verse at hand. Guest narrator Christian McBride intones the social strata thesis “Anywhere And Everywhere People,” while cornetist Ron Miles and reedist Jeff Lederer fly expressively around him. Vocalist Dawn Thomson coos a campfire lament that manages to synopsize heartbreak with the line “love is a fool star,” while bringing some twang to the party.

The core ensemble (bassist Martin Wind rounds out the quintet) is versatile enough to cover this variety. As actor Jack Black (husband of Charlie Haden’s daughter Tanya) echoes voice-over artist Ken Nordine on “Snatch Of Sliphorn Jazz,” Lederer and Wilson free-bop their retorts. And when Wilson, who grew up a stone’s throw from Sandburg’s birthplace, eerily mallets his toms as a recording of Sandburg repeats the lines of “Fog,” the performance cuts to the essence of this irresistible record: The connections are deep.