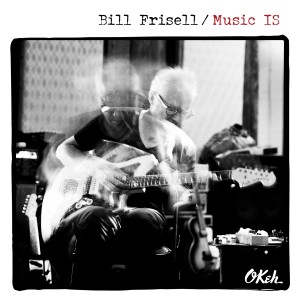 This long-awaited solo album from Bill Frisell, who has spent a considerable portion of his career collaborating with others, reflects just how far the guitarist has come since making his first recordings for ECM in the early 1980s.

As a leader and sideman on more than 250 albums, Frisell has proven himself time and again to be an expert at engaging his fellow musicians in meaningful musical conversations and playful call-and-response. In short, he plays well, and often, with others—and that’s what makes his unaccompanied performances on Music IS so revealing. On several tracks, Frisell essentially accompanies himself via studio overdubbing or looping. On others, he goes completely solo. Frisell maintains a light and spontaneous feeling throughout Music IS, even on the more “orchestrated” tracks.

To prepare for the recording, he played solo for a week at the Stone in New York with virtually no plan other than to attempt new music he never had played before and to keep himself off-balance. Then, he continued that process in the studio, where he recorded brand new original pieces (“Change In The Air,” “Thankful,” “What Do You Want,” “Miss You” and “Go Happy Lucky”) and reworked several compositions he’d recorded in the past (“Ron Carter,” “Monica Jane,” “The Pioneers,” “Kentucky Derby,” “Winslow Homer,” “In Line,” “Rambler”), some radically so. Frisell’s piece “Pretty Stars Were Made To Shine,” from his 2001 album Blues Dream, appears here in two pieces, as the first and final tracks: “Pretty Stars” and “Made To Shine.”

Produced by longtime collaborator Lee Townsend, Music IS presents Frisell at his most unguarded, in an intimate setting that renders him and his guitars completely exposed. It provides listeners with a portal of sorts to get inside the mind of Frisell, whose willingness to experiment knows no bounds, and whose genius runs deep.