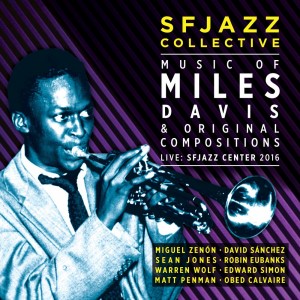 For most of its 13th season, the SFJAZZ Collective chose to honor the music of Miles Davis. Members of the all-star octet each wrote an arrangement of a selection from the legendary trumpeter’s songbook and also penned an original piece. As has been the case since its opening in January 2013, the SFJAZZ Center was the setting for these live recordings.

The Davis material is sourced from pieces first released in 1958 (“Milestones,” “Nardis”) through 1986 (“Tutu”). The all-time popular Kind Of Blue is unsurprisingly the source of two numbers.

Clocking in at almost 11 minutes, the Collective’s Calvaire-arranged take on the title track to Davis’ 1970 Bitches Brew reflects the haze-filled exploration of the original. Simon switches to electric keyboard and helps bassist Matt Penman sustain tension during an indefatigable solo. The addition of vibraphone and Wolf’s masterful use of sustain adds an extra meditative level to “All Blues.”

Jones has played in various acoustic and electric Davis tribute projects since 2011, and his original “Hutcherson Hug” was an emotional standout whenever it was played live during a season in which SFJAZZ honored SFJAZZ Collective co-founder and Bay Area resident Bobby Hutcherson (1941–2016).

Named after the demonstrative way in which the late vibraphone and marimba master would greet his bandmates—and most anyone else he knew—“Hutcherson Hug” appears on the Davis tribute album, with an extended introduction by Wolf.

Penman’s “Your Turn” features another exciting introduction, this time by the entire horn section. The composer himself follows up nimbly with support from his rhythm section mates; Simon’s spiraling playing and Calvaire’s insistent snare frame the bassist’s patient note choices. e Collective’s vocal chops are put to use at the front end of alto saxophonist Miguel Zenón’s “Tribe,” while tenor saxophonist David Sánchez’s “Canto” draws from Haitian and Puerto Rican traditions.

A couple of unexpected Collective member originals provide fun moments of surprise. Wolf’s “In The Heat Of The Night” is the ultimate acoustic slow jam, and Simon’s “Feel The Groove” closes the album in an infectiously danceable manner.